IPL was conceptualized after India’s great hit in ICC WT20 2007. And then, its inaugural season was played in 2008 with a total of 8 Indian Premier League Teams. It’s a great chance for BCCI to earn cash, as it is the most loved and watched cricket league worldwide. IPL is one of the most popular online betting sports in India.

Our website has been designed with the needs of our bettors in mind. That’s why you will find it so easy to use, which will make your betting experience more convenient, allowing you to bet more quickly, crucial with live IPL cricket betting when every second count!

Though it is not an international cricket league, still, it is treated no less than that. This cash-rich league unites the best players from all over the world and make them strive hard for their team, despite their nationalities.

IPL is hugely loved by cricket enthusiasts. In fact, it is the most-watched T20 league, and ICC or any other cricket playing nations avoid holding cricket tournaments during the IPL time. And the best part is, it gives young talent an opportunity to make a path towards the International Indian Cricket team. Jasprit Bumrah, Hardik Pandya, Ravindra Jadeja, Rishabh Pant, and to name a few, are the discovery of IPL.

Every year, IPL is being played between March and May. And it is played in the same T20 format. The game follows a simple format first where 2 teams play against each other twice (home and away).

And then, the four teams left at the end of the table will be eliminated. The top two teams will enter the Qualifier round automatically. And the one who wins the Qualifier 1 round directly enter the Finals.

Now, the winner of the Q2 round will play in the finals with the finalist team, and the one who wins will hold the IPL trophy high.

In the recent 14th edition of IPL, Chennai Super Kings were the IPL champions, with KKR the runner-up team. However, before the second phase of IPL 2021, everyone was predicting Delhi Capitals as the winners because till the 29th match, they were on the top of the table.

But, the game changed, and CSK took the trophy home. Interestingly, an RCB fan declared Kohli led RCB being the winner of the IPL 2021 season using his simulation theory, which created a lot of buzz around the cricket world, and fans were happy anyways hearing RCB finally won IPL in some way. 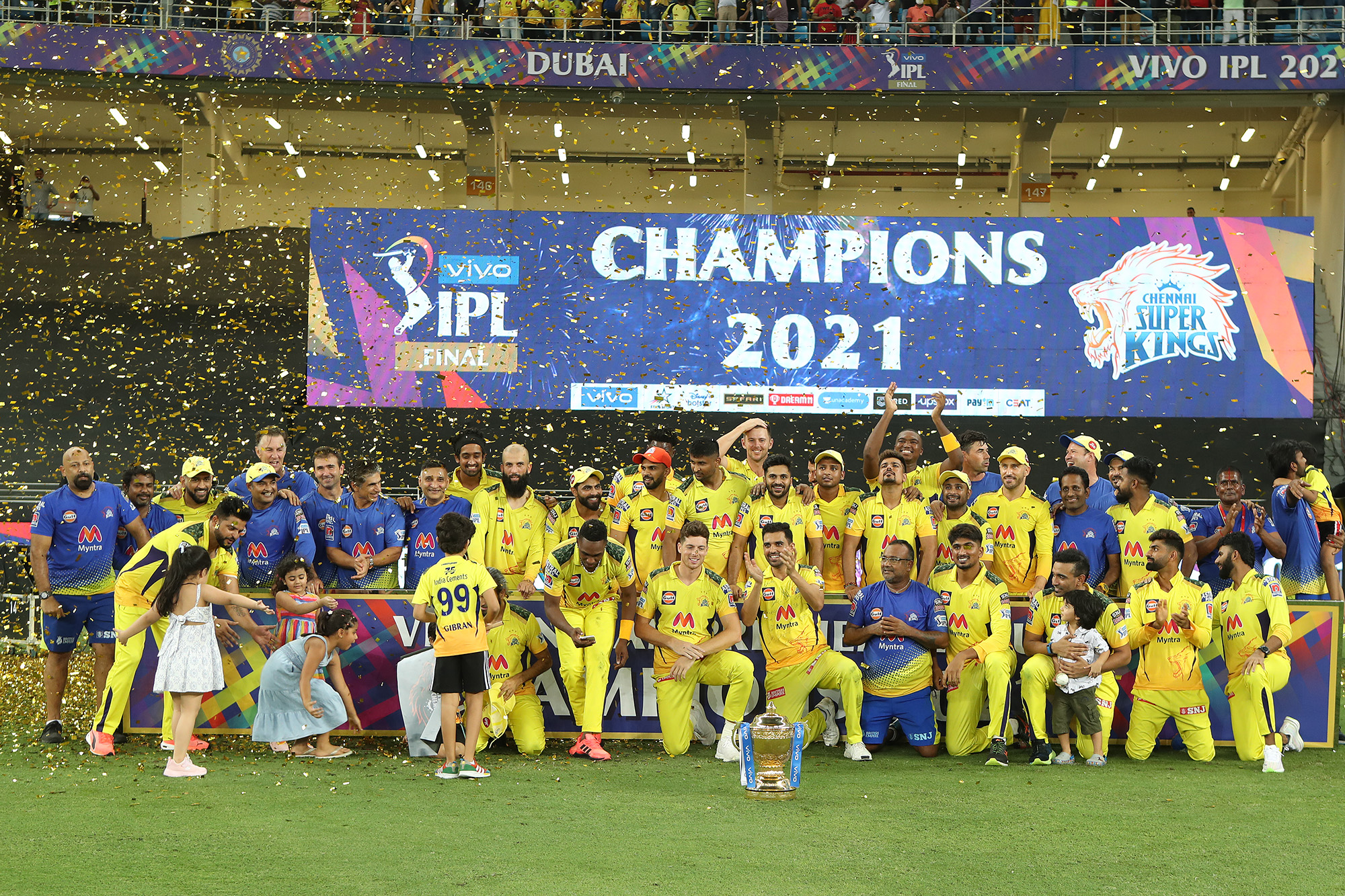 This table represents a summary list of IPL winners of all seasons, along with the number of times they’ve qualified for the finals. More, it informs about the win years individually and the number of seasons each team has played.

The inaugural IPL season 2008 started with many big names. But no one expected RR to win the season, as they’re usually known to contain uncapped, infamous players.

But, this Shane Warne led team won the game against the season’s strongest team CSK by 3 wickets. The match was played in DY Patil Stadium, Navi Mumbai. And the team had the likes of Yusuf Pathan, Graeme Smith, Sohail Tanvir, and to name a few.

It was the game where Yusuf Pathan played the match of his life. He took 3 crucial wickets and scored 56 runs off just 39 balls, and became the Man of the Match. While, Sohail Tanvir, bowler of the RR team, earned the purple cap for the most number of wickets, that is 22.

The final match of IPL 2009 was played on the 24th of May, 2009. Deccan Chargers won the title against Royal Challengers Bangalore and became the second IPL winning team, despite RCB having solid players.

This match was played at the New Wanderers Stadium, Johannesburg. DC scored 143 runs which RCB failed to chase and made only 137 over 9 outs.

This IPL season, CSK, the most consistent team of the IPL, won the IPL title for the first time. The final match was held at DY Patil Stadium, Navi Mumbai, on 25th of April 2010. CSK gave a target of 168 runs which MI failed to chase following the win of Super Kings by 22 runs. Sachin Tendulkar of MI was named the Player of the Series.

The CSK team became the trophy winners for the second time by defeating RCB of 58 runs in CSK’s home ground, M. A. Chidambaram Stadium, Chennai. The match was played on 28th of May, and Murali Vijay of CSK was named the Man of the Match.

Kolkata Knight Riders defeated their strongest rivals, Chennai Super Kings, during the final of the IPL 2012 season. All thanks to the KKR player Manvinder Bisla who scored a massive 89 runs over 48 balls, helping KKR chase the target of 190 runs.

The interesting thing about the match was, it was played on the CSK’s home ground M. A. Chidambaram Stadium, Chennai. And Manvinder Bisla became the Man of the Match.

It was the first time when Mumbai Indians won the IPL trophy and started their journey of becoming the strongest IPL team. Since that year, MI never looked back.

During this season, MI defeated their arch-rivals and the IPL’s most consistent team by 23 runs. This final match was played at Eden Gardens, Kolkata and Kieron Pollard of MI was named the Man of the Match.

Kolkata Knight Riders won their second IPL title during IPL season 2014. The match was played at M. Chinnaswamy Stadium, Bengaluru, on 1st June 2014. It was a heart-wrenching defeat for Kings XI Punjab as they lost the game by 3 wickets and failed to chase the target in 20 overs. Manish Pandey of KKR was named as the man of the match.

Rohit Sharma-led Mumbai Indians became the IPL winning team for the second time by again defeating Chennai Super Kings. The match was held in Eden Gardens, Kolkata, on 24th of May 2015. MI gave a target of 202 runs which CSK failed to chase and ended up with only 161 runs. The skipper of MI, Rohit Sharma, was declared the Man of the Match.

Despite a great performance of the RCB throughout this season, Sunrisers Hyderabad managed to become the trophy winners. All thanks to David Warner, who led the team heroically throughout the 2016 season and SRH won by a margin of 8 runs. But still, the great partnership of Virat Kohli and AB de Villiers caught eyeballs during this season, as Virat scored 4 centuries and 6 half-centuries in his 16 innings. This match happened at the RCB’s fortress, and Virat Kohli won the Player of the Tournament award.

Mumbai Indians, the IPL champions, once again secured an IPL by a margin of 1 run against Rising Pune Supergiants. The match happened at Rajiv Gandhi International Cricket Stadium on 21st of May 2017. This Rohit Sharma led team performed exceptionally with their ball during this season. And Krunal Pandya of MI was awarded Man of the Match.

Dhoni-led CSK again marked their name in the IPL winners list on 27th of May 2018. The match was held at Wankhede Stadium, Mumbai, and CSK defeated SRH by 2 wickets. Shane Watson of CSK was awarded Man of the Match.

It was the third time when MI defeated their traditional rivals CSK. The match happened on 12th of May, 2019, and MI won by a margin of a single run. This historical occasion happened at Rajiv Gandhi International Cricket Stadium when Mumbai Indians became the first team in the history of IPL to win the trophy for the fourth time. However, Imran Tahir’s (CSK bowler) performance with the ball was exceptional, and thus he was awarded Purple Cap for this season.

This IPL title made Rohit-led MI the most successful team in IPL history. MI became the IPL winning team for the 5th time by 5 wickets. Trent Boult of Delhi Capitals became the Man of the Match. This match happened at Dubai International Cricket Stadium on the 10th of November, 2020.

On 15 October 2021, Chennai Super Kings beat Kolkata Knight Riders by 27 runs in the final, to win their fourth IPL title. 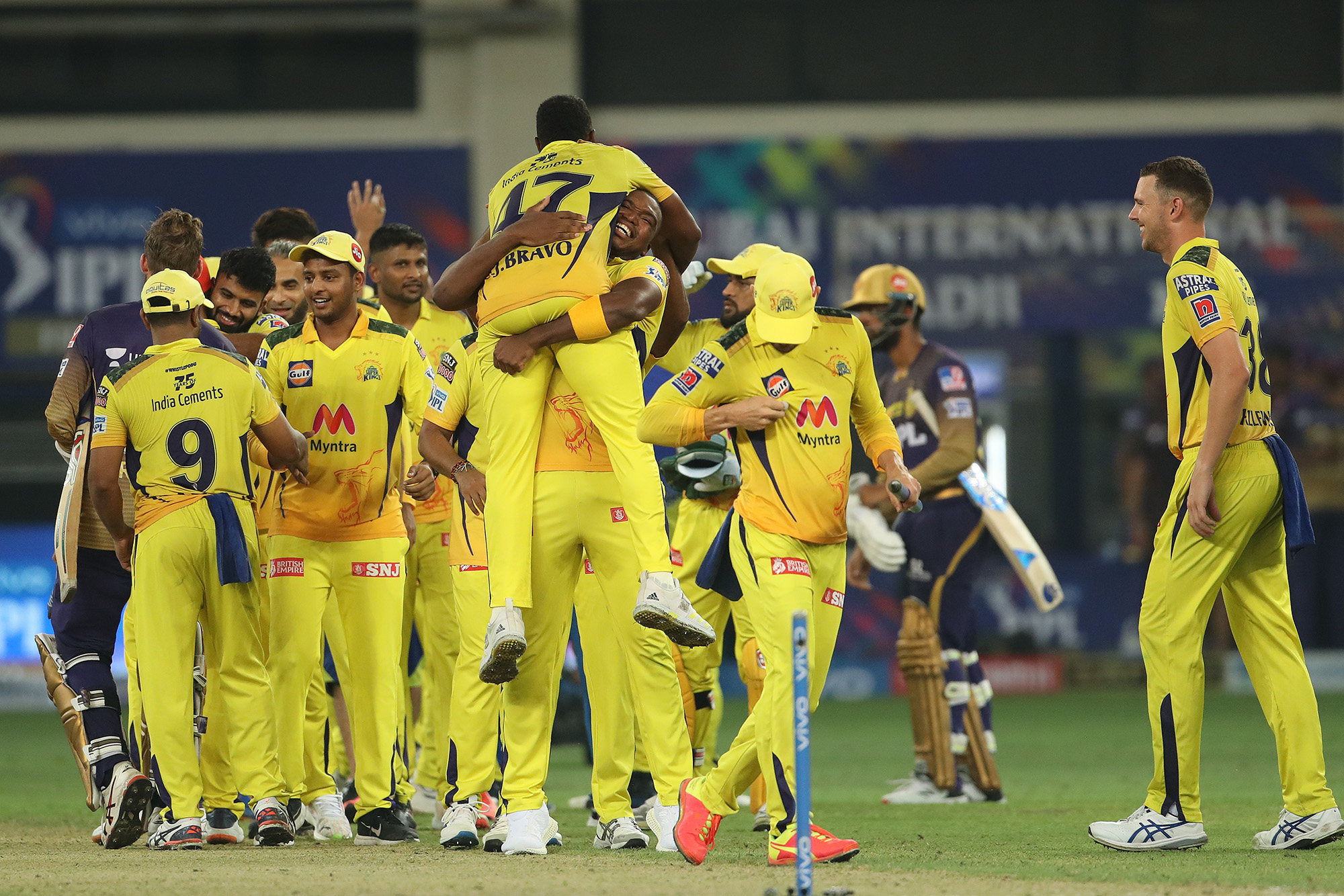